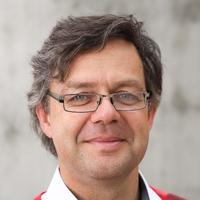 Biography
Matthias Troyer is a Distinguished Scientist at Microsoft and affiliate faculty at the University of Washington. He is a Fellow of the American Physical Society and Vice President of the Aspen Center for Physics. Troyer is a recipient of the Rahman Prize for Computational Physics of the American Physical Society for “pioneering numerical work in many seemingly intractable areas of quantum many body physics and for providing efficient sophisticated computer codes to the community.” He is also a recipient of the Hamburg Prize for Theoretical Physics. He received his PhD in 1994 from ETH Zurich in Switzerland and spent three years as a postdoctoral researcher at the University of Tokyo. Later, Troyer was professor of Computational Physics at ETH Zurich until joining Microsoft’s quantum computing program at the beginning of 2017. At Microsoft he works on quantum architecture and leads the development of applications for quantum computers. His broader research interests span high performance computing, and quantum computing, as well as simulations of quantum devices and island ecosystems.
Presentations
Keynote
Quantum Computing: From Academic Research to Real-World Applications